Thirty-five iconic statues in the streets of London and Manchester, UK, have come to life through NFC recognition and smartphone technology. Passers-by can simply swipe their smartphones over signage displayed by the chosen statues and immediately receive a “call back” from the likes of Isaac Newton, Sherlock Holmes or Abraham Lincoln. The project is a low-cost “R&D” pilot, designed to create and harness spontaneous moments of wonder and turn them into engagement; and in the process, break down the virtual and physical walls preventing museums from reaching new audiences.   By meshing a narrative and innovative technology, people were persuaded to listen to a two minute slice of theater and as a result looked more deeply at the public art that had been going unnoticed. At the end of each monologue, the statues act as ambassadors, inviting visitors to explore related cultural institutions nearby, encouraging an audience that would not typically venture inside a museum to do just that. .

The starting point for this experience is to capture the curiosity of the passerby so statues were selected according to how appealing they could be for visitors and their ability to meet the public at eye level (so that one can quite literally see into the eyes of the speaking statue). The statues also had to be located in reasonably quiet areas where people could stop and listen to the recordings. To shape the recordings, researchers enlisted the UK’s most celebrated writers to imagine and pen witty monologues that accurately reflected the history and literature from which the statue derives, while concurrently bringing the person into the 21st century with lively conversation that would resonate with the public. Once the productions were complete, small plaque was adhered to the front of each statue for visitors to look for, with three ways to trigger a call back: a specially manufactured NFC chip, a printed QR code, and a mobile URL. With a simple tap, scan, or URL, a user is sent to a website which used Java to simulate the phone receiving a call, down to even having a ring tone and an accept call screen. The statue is on the phone – without the need to download an app ahead of time or other forward planning- via an audio file streaming to the phone and playing through the speaker. Statue Stories Chicago uniquely uses these NFC and QR to trigger an ‘experience’ which engages the public to interact with a city – turning the locations into virtual playgrounds and enriching their cultural significance in a fun and enjoyable way. For the first time, many previously ignored national heritage statues have now come back to life in the public’s mind and more people than ever are spending time contemplating them and their stories.

The Research Centre for Museums and Galleries at the University of Leicester evaluated and analyzed the results of the project through technical usage statistics (about access, location and timing) and public surveys. Since the project’s launch in August 2014, the total number of interactions to date has been just over 30,000. Of these, the majority (over 17k) have been through the QR codes, followed by the mobile URL (over 11k) and the NFC tags (around 2k). Small museums such as Dr. Johnson’s House reported a significant increase of visitors due to a talking statue nearby. The research from the University of Leicester comprehensively showed that the public not only reacted positively to the project, but that it brought for them new meaning to monuments that had previously gone unnoticed or appeared generic. They also noted that poignant or humorous narratives were successful in engaging new audiences (57% saying it “told them something new”, 42% saying it “made them laugh”, 92% agreeing that the content was “engaging and interesting”). For many participants, the experience of Statue Stories Chicago was an intensely personal one. With only 36% of users ‘listening with others.’ A large number of people (65%) participating in the surveys said that the NFC/QR experience was “easy to use”, confirming that we had succeeded in creating a “low barrier to entry”. The evaluation also confirmed that the project was able to raise the profile of statues in public places: “I’ve seen it many times. I didn’t think much about it until now” (‘Julie’, aged 56-65, Isaac Newton), “I would have walked past it without glancing up. I would have ignored it so it helped get my attention” (‘Jenny’, aged 16-25, John Wilkes). 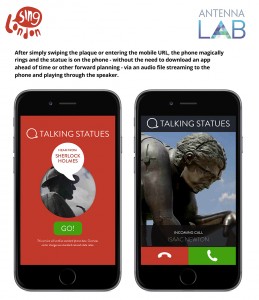 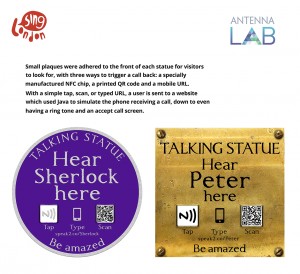 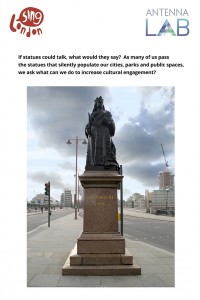