Gift for Athena is an Augmented Reality mobile game for the British Museum’s Parthenon gallery. The app, the first of its kind for the British Museum is used in a popular in-gallery education session for schoolchildren aged 7-11 as part of the ground-breaking Samsung Digital Discovery Centre programme supported by Samsung. The game stars Athena, the patron goddess of ancient Athens, whose birthday was celebrated by a procession around the Acropolis. It is available inside the Gamar app on the Apple and Android app stores. 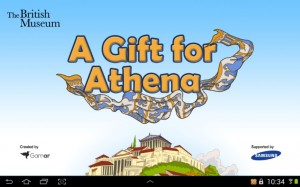 What is the game about?

Players are invited to take part in the procession around the Acropolis to celebrate Athena’s birthday. In the opening animation, they are presented with a special robe that should be taken to one of the temples on the Acropolis. On their way, they pass the Parthenon. Boreas, god of the wind, mischievously steals the robe and players have to complete a series of challenges in order to get it back. The challenges involve finding sculptures, solving puzzles and playing mini-games. Each set of challenges examines a different part of the Parthenon. After completing challenges children are shown how the sculptures they looked at in the gallery fit into the building as a whole. 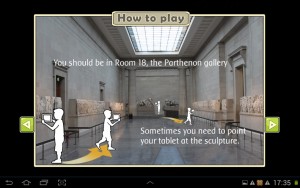 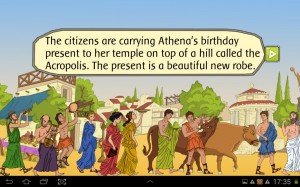 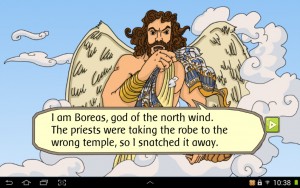 Why it is award-worthy?

Gift for Athena is unique in 3 ways:

The game leverages the strengths of AR to encourage users to discover aspects of the Parthenon sculptures that are difficult to see. Early testing of the game revealed that children had trouble differentiating elements of the sculptures because they are uniform in colour and badly damaged in some places. Two of the game’s challenges address that difficulty and support users’ visual exploration of the sculptures through  an ideal pairing of learning objective with digital interaction.

The Silhouette challenge (https://vimeo.com/95501915) displays an empty outline on the screen. Players match the outline with a sculpture in the gallery. When they find a match, they are rewarded with an animation and an explanation of what they have found. This activity encourages them to pay attention to the shape, size and volume of the sculptures, which were designed to fit into the triangular-shaped pediment of the building. 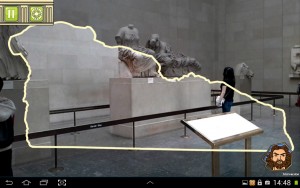 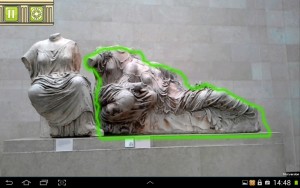 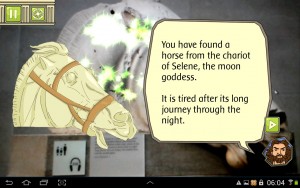 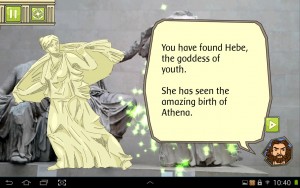 The Collecting challenge (https://vimeo.com/95471372) asks players to find different items on the Parthenon frieze. Clues in the form of line drawings are shown alongside a text description of the item. Children then have to find the item and scan it to confirm that it is the one they are looking for. If correct, then a reconstructed version of the item is superimposed over the (often damaged) original. It is the equivalent of real-time reconstruction. 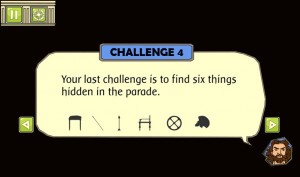 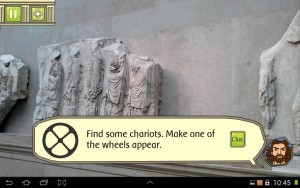 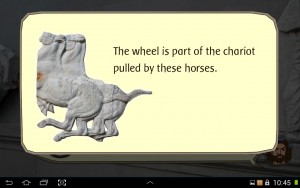 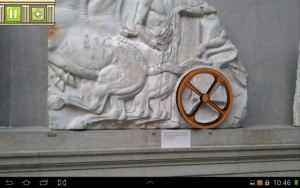 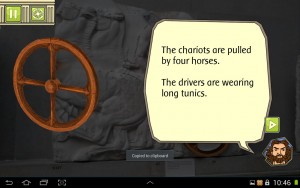 The technology behind Gift for Athena includes a patented AR engine that does natural feature tracking. Many AR companies and platforms do 2D recognition well: they can successfully use 2D images as triggers for content, but few are able to use 3D objects in the same way. The fact that the game can solidly recognize when visitors are looking at specific 3D sculptures in a busy gallery and varying light conditions is a real technical accomplishment.

Gift for Athena was the Museum’s first digital product to be developed through a lean approach. The final design was arrived at through extensive user testing and multiple iterations with prototypes. There were three rounds of formative evaluation with 250 children. The first test was based on a paper version of the game, this was followed by a simple digital prototype and finally alpha and beta versions of the finished game. The figure below shows an early prototype that yielded important information about the way visual clues functioned in helping players find the objects in the activities. 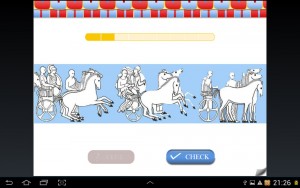 As much as possible, features of the app were based on feedback from users. The appearance of Athena at the end of the game congratulating children on their efforts was something that worked consistently well in testing. Young players appreciated being thanked by a character like Athena who they recognised. In interviews children said this positive reinforcement was satisfying. On the basis of this, it was given more emphasis at the end of the game. 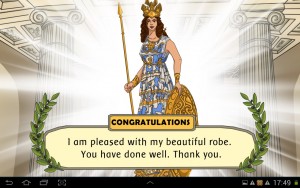 A satisfying mobile experience for users

Gift for Athena marries a compelling and entertaining narrative with well-crafted learning challenges. Its interactive AR game play with natural feature recognition breaks new ground in in-gallery mobile experiences. In most mobile games players look at 2D images of artefacts on-screen; This has little meaning when standing in front of the real thing. Gift for Athena’s AR challenges direct and support players’ looking at the real artefacts and their unique aesthetic qualities. Feedback from teachers whose classes played the game is overwhelmingly positive and has confirmed the benefits of the lean approach to mobile app development. One teacher wrote:

Many, many thanks indeed for the use of your fantastic Parthenon resources during our visit…The Year 4 children had a wonderful time working on the Samsung tablet app. Just as importantly, those digital exercises really consolidated their learning about ancient Greece.