This free online catalogue accompanies the exhibition Temptation: The Demons of James Ensor, which ran from November 23, 2014, through January 25, 2015, at the Art Institute of Chicago. The exhibition highlighted the museum’s newly restored, 6-foot-tall drawing The Temptation of Saint Anthony, by James Ensor. The catalogue—illustrated with over 500 images—includes three videos and takes full advantage of the interactive capabilities of the web. A pared-down printed catalogue was produced simultaneously, and both catalogues were on view in the exhibition.

James Ensor’s drawing The Temptation of Saint Anthony is impressive and dizzying because of both its size and iconography. Ensor crowded bizarre and sometimes blasphemous imagery onto 51 individual sheets and folios that he eventually glued together to make the overall work. Because of the size and intense detail work of the drawing, this catalogue project was the perfect candidate for an online publication that would allow readers to zoom into the drawing and see the layering of figures, details, marks, and overlapping sheets; in addition, the digital environment offered video elements that can help readers follow Ensor’s evolving composition and better understand the conservation and restoration processes that were part of the unveiling of this major work. With the high-resolution imaging made available through the catalogue, scholars, researchers, and other visitors can enjoy and explore the artwork up close even when it is not on view in our galleries. The drawing, save for two occasions, had not been on view for over 60 years. And, due to light sensitivity, the artwork had to return to storage after the exhibition ended.

In addition to interactive elements, the digital catalogue features ground-breaking art historical and conservation research. Six essays explore the historical context and visual culture that influenced Ensor as he created the work; one brings to light never-before published letters written by the artist that help us better understand the drawing. Another essay focuses on the multi-year conservation of the artwork.

A generous plate section includes a high-resolution, zoomable image of each of the 51 sheets that make up the overall drawing. Each sheet is individually discussed and various conservation findings that shed light on Ensor’s techniques are featured in the zoomable images. Related imagery is included at every turn.

The catalogue features three videos that focus on the conservation and restoration of the artwork as well as Ensor’s process and his groundbreaking techniques. One video shows the conservator’s hypothesis as to the order in which Ensor composed the 51 sheets and folio. Conservators also discovered that the drawing went through two rounds of patching: first, Ensor placed patches over material that was especially controversial during his lifetime; later a restorer, in consultation with Ensor, added another layer of patches to fill in areas after the drawing was damaged during WWII. In the catalogue, readers are actually able to take a patch on and off to reveal Ensor’s original composition as well as what it looked like after the rounds of patches.

The online exhibition catalogue was funded by the Regenstein Foundation, and its development grew out of the OSCI toolkit and ChicagoCodeX, both open-source repositories available on Github.

In order to take advantage of the book’s full functionality, we recommend using the latest version of Chrome, Safari, or Firefox. 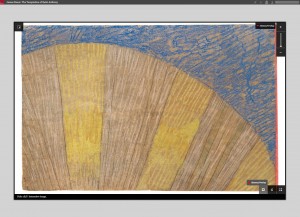 This image shows an example of how each of the 51 individual sheets and folios can reveal various conservation information. 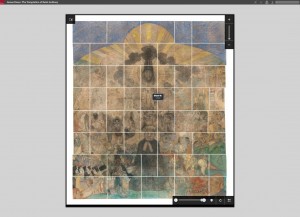 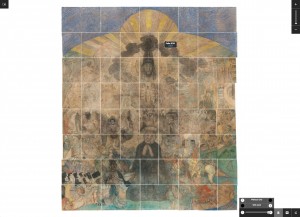 This image shows the interactive image of the overall drawing and the ability to turn the grid on and off via a slider tool. 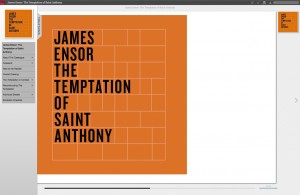 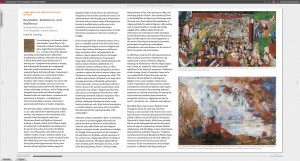 This screenshot shows an example of how an essay is composed within the catalogue. 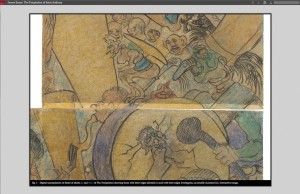 This screenshot shows an interactive image that allows the reader to overlap and align two of the sheets in the composition just as James Ensor did as he was completing the drawing. 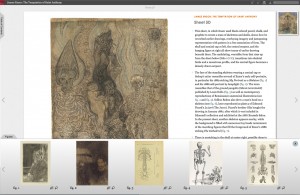 Throughout the catalogue, figure drawers exist that can be pulled up from the bottom of the screen that reveals related iconography. 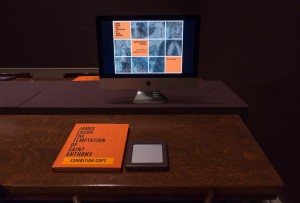 Both the online catalogue and the printed catalogue were on view in the exhibition’s reading room.