A World War II postcard calls out ‘Feed the guns’ in uppercase type, a photo of an Edwardian woman standing in a leafy glade, a bright red typewriter coveted by collectors. What’s the one thread that connects these seemingly unrelated collection items? That’s the question we put to our online visitors in a Twitter game called #OneThread.

#OneThread is a collections-focussed, spot-the-connection game. During each game, participating galleries, libraries, archives, and museums post clues to their Twitter accounts. Each clue is an image of a collection item accompanied by a brief, sometimes cryptic, description. A game runs from Wednesday to Friday, during which time online visitors are encouraged to guess which idea, date, person, or thing links all the clues to each other. The solution is revealed at the end of the game, when all the clues have been posted.

By following the images and clues across all the participating museum Twitter accounts, our players gain a better understanding of the breadth of objects we hold in our collections, and the links that exist between our collections. We have been pleased to see motivated players take the next step and dive into our collection databases to unlock clues and discover the link that connects them.

The collaborative clue-setting between the participating museums is mirrored by our players who draw on each other for inspiration to solve the weekly puzzle, or tag in friends to introduce them to the game. During one game, a group of history postgraduate students downed research tools to print out and annotate #OneThread clues in order to find the connection.  Other players put forward intriguing theories about the connection for a game. These are delightful pieces of user contribution and deserve their own #OneThread Leaderboard.

#OneThread is intended to be a light-weight game, one that can be easily played without too much instruction. With only a simple set of rules to guide our players, we’ve been very pleased to see how well the game has been embraced. With no promotion outside of the participating museum Twitter accounts, #OneThread has been taken up by local and international players, and has received kind encouragement from museum social media colleagues. 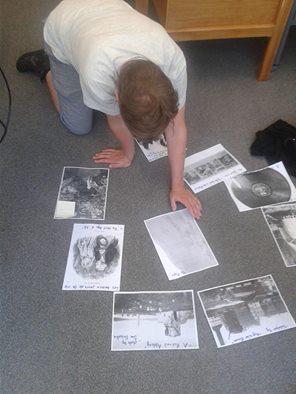