The Fondation Louis Vuitton wants children aged 6 to 12 visiting the new Frank Gehry designed museum with their families and friends to “look up” at the building and become “apprentice architects”. The app : “ArchiMoi” is focused on architecture to let the parents and/or the guides introduce the artworks to the children. The brief was to design an app for the iPad Mini – visitors are able to borrow a device from the welcome desk on arrival at no cost. The app was launched with the opening of the museum and is also available free on the Apple App Store in French and English. Use of the devices and the app in the museum has been very positive.

The microsite and preview trailer are here: http://archimoi.fondationlouisvuitton.fr/en/  to take you through the app.

Touchpress  was selected because of its reputation for making “inspiring apps for curious minds – apps that change the way you see and understand the world.” Touchpress defines what is possible with mobile technology and their apps are recognised as amongst the most exciting and innovative in the world.

The design of the app was the result of a pre-design phase that started long before the building was opened. This “exploration phase” was built on a round of collaborative workshops supported by external experts such as Reciproque agency. It led us to define a very strong axis for the future app that revolved around the concept of “digital nanny” that would take care of the kids during their visit, leaving their parents free to enjoy their experience while learning about the building and then get them talk and exchange together inside the galleries about artworks. 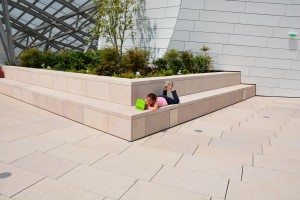 The Fondation Louis Vuitton is designed as a giant promenade with scattered galleries and many circulations and viewpoints. We wanted the kids to experience their own promenade. The app does not require any sound to function. This was thought to repect  the other visitors in the galleries.

The Fondation Louis Vuitton is, like all Gehry’s buildings, a complex entity composed of many sub spaces where lines, perspectives and volumes are voluntarily distorted. By providing a game that engages children to look around them and find relevant spots in Gehry’s building, the app empowers the child to orient himself and to understand the complexity of the space. A smart interactive map is provided to make the kids more autonomous in their discovery of the space. 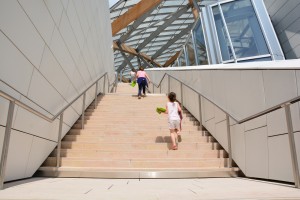 What we’re observing are children with the app leading the entire family. It is no longer the parents only deciding the path to follow.

By taking full advantage of the capabilities of the iPad, the user is able to create their own 3D model made up of different-shaped building blocks and Frank Gehry-style sails, that can be ‘inflated’ as if by the wind. These three-dimensional curves are NURBS, a mathematical model used in the programs that would have been used to make the real computer models of the Fondation. The intuitive design of the app means that these capabilities are easily accessible by young children. 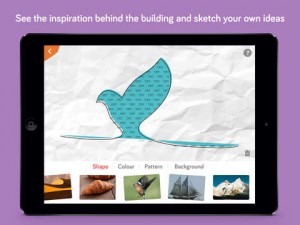 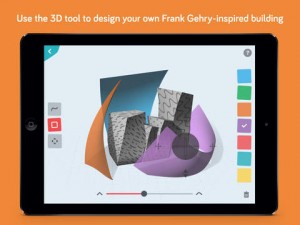 Also in the app are five full 360° images taken from high up places in the museum giving the user a new perspective of the space they are in.

In another game, the app makes use of the iPad’s gyroscope to place glass panels in the sails. 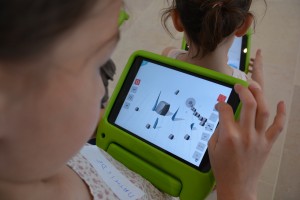 “Apprentice Architect” innovates in its approach to museum apps, inviting the user to be creative and actively explore the space they are in, rather than simply read or hear about it. One example of this is where the child uses the iPad’s camera to recreate images of the Fondation as they go around the museum. 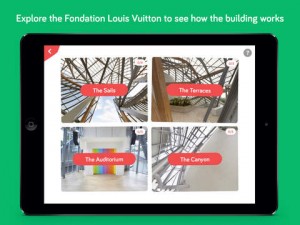 Kids are able to share their inspirational sketches and 3D studio designs via email (through a parent gate) or receive a color portfolio at the end of their museum visit. Here is an example of a portfolio : 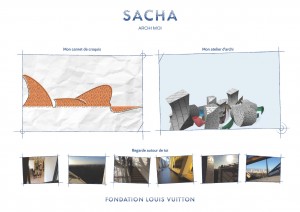 The staff is trained to promote the app from the line where people are waiting before entering to the end of the experience saying “you can find the app for free on the App Store at home”.

The app was designed with the possibility of extending to other devices – iPhones and selected Android tablets and phones – and this is under discussion. Each of these six activities works independently and can be enjoyed in any order. We may develop and release some of them as standalone individual apps for phone and tablet in the future; in particular the “Where’s Frank?” game which kids love and which gives a fun overview of the building in cut-out and the roles involved, and “My Studio” which mimics complex architects’ CAD programs to allow kids to design FLV-like buildings with the core “icebergs and sails” structure.