Doris Salcedo’s Public Works is a 25-minute documentary video that presents the site-specific works of Colombian artist Doris Salcedo. The film allows these important but ephemeral artworks to be represented alongside Salcedo’s sculptures in the retrospective exhibition, Doris Salcedo, which opened at the Museum of Contemporary Art Chicago in February 2015. The documentary treats all of Salcedo’s major public works: Untitled (in memory of Jaime Garzon), 1999-2000 (Bogotá), Noviembre 6 y 7, 2000 (Bogotá), Untitled, 2003 (Istanbul), Neither, 2004 (London), Abyss, 2005 (Turin), Shibboleth, 2007 (London), Act of Mourning, 2007 (Bogotá), and Palimpsest (unrealized).

The film combines archival footage and photography with new interviews with Doris, her studio assistants and gallerists, and the curators of the exhibition. It is organized around a chronological narrative that examines each of seven public works, weaving in elements of Salcedo’s philosophy, biography, and studio practice. It treats the development of Salcedo’s work from monument to immersive installation to the ephemeral. The core themes of loss, memory, and mourning in her work resonate across the narrative as reoccurring presences in each of the works. The documentary also details Salcedo’s extensive research process; her meticulous attention to materials and production; and her underlying conviction that through art, victims of violence may be remembered and mourned.

This film was produced (researched, scripted, and edited) entirely in-house by the Museum of Contemporary Art Chicago with the support of contracted camera operators in London, Montreal, and Bogota. 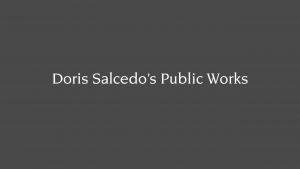 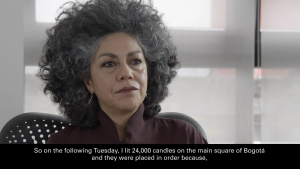 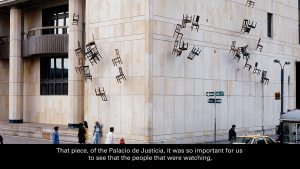